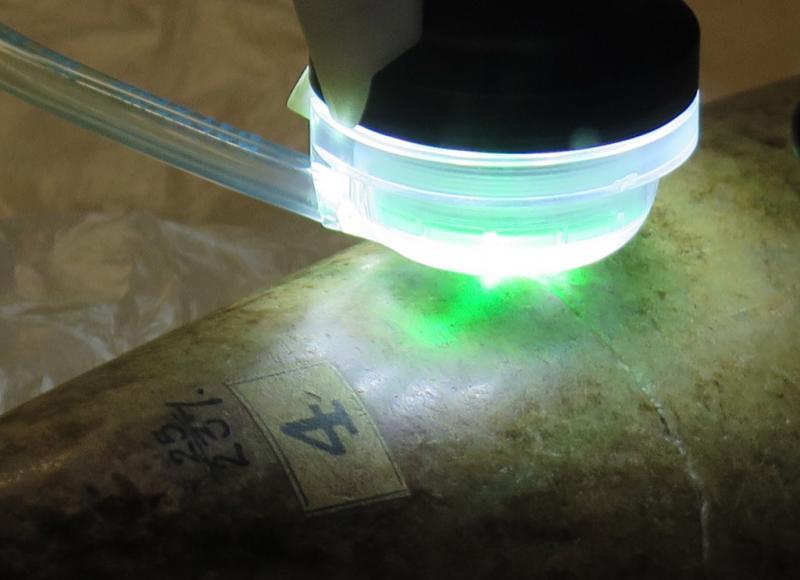 The project has three complementary strands of analytical investigation: pXRF, laser ablation and EPMA/SEM. Integrating the different analytical approaches provides a comprehensive understanding of the artefact, both in terms of material properties and provenance.

The overall methodology includes an initial petrological study of all selected artefacts using a hand lens and then characterisation of a representative part of the artefact using a portable XRF (pXRF). Although only a semi-quantitative method for the light elements such as Mg and Al (significant components of jadeitite), these data are invaluable in assessing if artefacts are made of exotic materials such as nephrite.  The data recorded can assist in identifying their composition, though not their source. 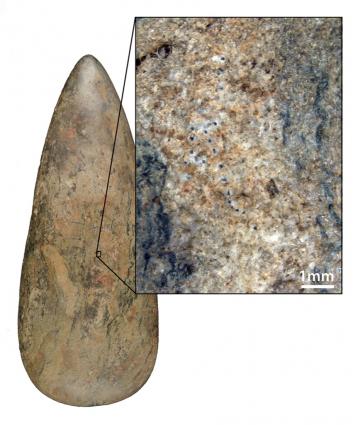 Laser ablation sample site on a 15cm celt from the Bahamas. The detail shows an enlargement of the sample site, with 20 ablation pits, each 100 μm in size - about the width of a human hair. Courtesy Peabody Museum of Natural History, ANT 137371

The innovative approach key to this study is the use of a portable laser ablation system capable of obtaining samples from ~100 µm diameter ablation pits. The ablated material is captured onto Teflon filters and returned to the laboratory in Amsterdam where ultra-low blank Sr-Nd-Pb isotope analyses are performed. The technique is only now possible due to the recent development of mass spectrometry collector technology pioneered by Gareth Davies’ group where application to sub-nanogram sized geology samples has been validated.[1] The macroscopically non-destructive and portable sampling technique is one of the key reasons the museums have supported the study. In situ sampling also enables curators and conservators to be directly involved in sampling strategy.

The EPMA/SEM analysis (lead by García-Casco) will be done on fragmentary, duplicate or historically thin-sectioned material. Petrographic/chemical analysis of mineral assemblages in rock-sample thin sections by means of optical and EPMA/SEM (±LA-ICP-MS) allows precise determination of the intrinsic nature of mineral assemblages, their origin and evolution. Even if apparently similar, rock-samples display varied mineral assemblages and textural relations at the micron to mm scale that can be related to specific sequences of crystallization, dissolution and growth. This type of study allows us to decipher the physical-chemical conditions of formation and the origin and evolution of the rock under investigation. This information is key for jade-provenance studies, in particular in the Lucayan communities of The Bahamas, for mineral assemblages and textures of known geological sources of jade in the region, eastern Cuba and northern Dominican Republic, are distinct. These are the more probable sources of Bahamian jade artefacts, though a Guatemalan source and/or unknown geological sources cannot be ruled out. In this regard, petrologic studies may not only help to decipher the networks of pre-Hispanic communities, but may also provide evidence for the existence of hidden sources of jade that remain to be (re-)discovered, an interesting issue for both geologists and archaeologists.

The SIBA project will evaluate interisland connections through The Bahamas and the Greater Antilles using computer-based analysis. Using sea-based least cost approaches, routes through The Bahamas will be generated on a seasonal basis. These least cost routes will be based on modern current and wind information, providing the opportunity to test how canoers may have reacted to seasonal differences or extreme weather occurrences. Modeling the paths of canoe routes will allow for analysis of which areas were easier to reach or more likely a part of regional exchange patterns. The cost to travel between two islands can then be incorporated into a broader network analysis connecting sites and materials in the region. This work can provide an independent baseline for possible interaction and can be compared against known material exchange within the archipelago.